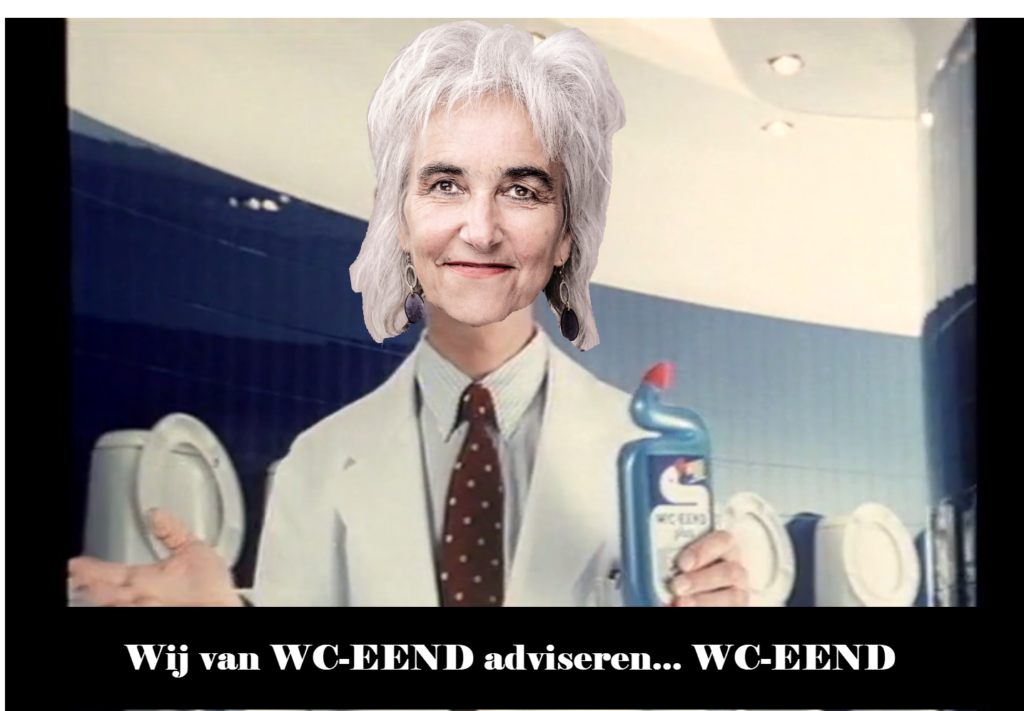 A short history lesson: “Wij van WC-EEND adviseren WC-EEND” refers back to a commercial from the past. In it, a Wc-eend expert – attired in a white doctor’s coat – recommends his own brand of toilet cleaner as the best solution for cleaning your toilet. He does this with the now legendary words “We at Wc-eend recommend Wc-eend”. The slogan took on a life of its own after the advertising campaign. It’s now an expression used when an expert gives advice that is in line with his self-interest. How fitting.

A friend of mine alerted me to an article – “Covid-19: Infectiousness and Transmission” – on the website ‘Medisch Contact’. Medisch Contact – from the Koninklijke Nederlandsche Maatschappij tot bevordering der Geneeskunst (KNMG) – states on its About Page: “By means of a multimedia mix including weekly magazine, website and newsletters, it offers a platform on which doctors can exchange ideas with each other and with other workers in and around healthcare“. (Thank you Google Translate). So any article on ‘Medisch Contact’ reaches many, if not all, doctors and, by default, influences the opinions of many doctors, nurses and other healthcare professionals. Whatever is posted on here, has a major impact. One would expect a modicum of quality control. On this ‘Medisch Contact’ fails. Miserably.

My major issue with this article

The article – and I quote using Google again – concludes: “It is now clear that in addition to the known routes – direct droplet contamination and surfaces – the floating aerosol droplets do participate in the transmission, but their contribution is minimal“. The article goes on to say: “The probability of live virus in aerosols in SARS-CoV-2 infected patients is less than 0.001 percent. But it is quite possible that people with high viral loads spread more aerosols. The question is how long they do this and with what load others become infected“.

The article cites two studies on which it bases its conclusion.

The article – in essence – completely dispels any idea that aerosols could have a meaningful role in spreading of Sars-CoV-2. It basically says: “Yes, aerosols do exist but the odds of contracting COVID-19 from it are negligible and if you do it’s because of some sort of super-spreader lurking in the dark”. And so, yet again, people are being made afraid and mislead about the coronavirus.

I would have expected the author – Henk Maassen (1958) – to have done a modicum of due-diligence. Even though, I admit, he has no background or expertise on this topic whatsoever. This article is a puff piece, if printed, suitable for another type of use near a toilet. Plain and simple. Allow me to explain to Mr. Maassen, what he should have noticed and why he would be wise to retract this article immediately, including offering an apology to all his readers.

My major issues with both papers

My own paper, despite all the data we offered, is being ignored by decisionmakers, precisely because it has not been peer-reviewed. Despite my research allowing me to accurately and publicly predict (i) the rise in infections in Australia by July 1st 2020, (ii) corona-hotspots in the 3rd week of september and (iii) the second-coronavirus-wave in week 44 of October, in The Netherlands. Professor Jacco Wallinga was kind enough to write me back, saying he would wait for a peer-review of my paper before taking the conclusions into consideration. Despite the fact that I warned we only had 6 weeks before the start of week 44 (and that a peer-review might take up to 6 months) would hit and despite the fact that, on numerous occasions, he too wrote opinions on the relationship between spreading of Influenza and Humidity. One would think that a person with 3 accurate predictions would have been asked to help fight this disease. But no. I am not allowed in your club and ignored. Because it has not been peer-reviewed.

But when it serves their interests: “We at Wc-eend recommend Wc-eend”.

My issue with Study 1, written by Koopmans herself.

First off, its a “systematic review, using meta-analyses and modeling”. I too can find enough papers that claim WC-EEND works well in toilets, while ignoring papers that claim otherwise. Now on to the paper itself. The authors were kind enough, similar to a trial, to document the evidence.
Consider the line-numbers to be “Exhibits”. You can read them for yourself.

Your honor may I draw your attention to Exhibit 237 and 238?
Quote: “It remains unelucidated how case characteristics and environmental factors affect the viability dynamics of SARS-CoV-2“. My issue – and I have seen this before – is: Numerous studies – peer-reviewed – have established a clear environmental factors that affect viability. My study and a study named: “Mechanisms by Which Ambient Humidity May Affect Viruses in Aerosols“. Professors Wan Yang and Linsey C. Marr are true experts when it comes to the transmission of respiratory viruses. In addition to their own research, reference is made to 64 peer-reviewed studies to further substantiate their statements. So it’s complete hogwash to claim that environmental factor impact is unclear. Anyone who claims “it remains unelucidated” should not work in this field. And certainly not publish papers.

Your honor may I draw your attention to Exhibit 609?
Quote: “Based onconditions of room temperature and a relative humidity of 59% (near the upper limit of 60% for healthcare and typical indoor specifications)‘. And this is the Smoking-Gun! Room temperature of 22 Celsius with a Relative Humidity of 60% equals 9.79g/kg Specific Humidity.
In my – and 21 other peer-reviewed studies – we already concluded that such a high humidity prevents the vast amount of expiratory droplets from evaporating and transforming into aerosols.

Professor Koopmans, You claim ignorance regarding environmental factors while implementing a setup that has the specific effect of reducing aerosols and their infectivity. And then you have the audacity of implying – using very fancy words that most people don’t understand – the effect of aerosols to be minimal. Did you really think you would get away with this?

This was interesting to me because it involves an actual setup and an actual test. But right of the bat, let me also tell you that what I uncovered should shock many foundations to their core. On the 24th of July 2020 a Dutch court issued a verdict regarding a legal challenge to the COVID-19 measures of the Dutch government. In its verdict the court states: “De Staat handelt hierbij voldoende zorgvuldig. Want vooraf wordt steeds advies van een team deskundigen verenigd in het Outbreak Management Team ingewonnen. Daarna worden de diverse belangen gewogen en maakt de Staat beleidskeuzes“. Essentially the court states that the Dutch government is getting advice from experts, in Outbreak Management Team (OMT), and that the government trusts that the experts know what they are doing. A remarkable verdict but not one that could be challenged or appealed easily. Up until now. Note: Marion Koopmans is a member of the OMT and not just any member. She is one of the most important members.

I know it’s not her setup. But it’s her underlings and she is promoting it. So now she has to ‘own it’.

As you can see in the picture (directly from the paper itself): (i) There are pipes with multiple 90° turns. The airflow was directed upwards from the donor ferret to the indirect recipient ferret and air travelled on average 118 cm through the tube. (ii) One ferret is placed above the other ferret, not horizontally and(iii) the donor ferret (the sick ferret) is placed below the healthy ferret. This seems innocent, it’s not. In the paper, starting on line 132, it states: “measurements with an aerodynamic particle sizer in our new set-up showed that particles >10 μm were present in the donor cages, but also at the entrance of the recipient cages, suggesting that despite the distance between the cages, larger particles were carried to the recipient animals due to the high flow rate”. The flowrate was 100 liters per minute (line 151). That is 6000 liters per hour or 6m3 per hour. That is NOT a high flow rate, it’s a LOW Flow Rate. And nowhere in the document are temperature and humidity mentioned. That makes ANY SUCH TEST SUSPECT. Because Humidity and Temperature are THE DETERMINING FACTOR in aerosol formation and infectivity. Not listing the Humidity and Temperature makes this whole paper suspect and useless. And this is something the professor knows – or at the very least – should have known. I don’t believe in coincidences. It gets worse…

The setup only leads to 1 conclusion; Aerosol infection is minimal.

This setup was a setup. A setup that could lead to only one conclusion; Aerosols are harmless. And Marion Koopmans knows this or should have known this.

Dear professor,
You are either completely and utterly incompetent or you purposefully manipulated two papers and one setup, knowing full-well the impact it would have. The consequence of both faulty and misleading papers and the resulting misleading articles (in the media) creates a false narrative that disqualifies the role aerosols play in the spread of this deadly disease (again). As a result more people will get infected, more people will die and more businesses will fail because they are not taking ALL the appropriate measures to protect themselves, including protection from virions in aerosols.

You should therefore consider offering a public apology, withdrawing from the OMT immediately and seriously think about resigning your post as Head of the Erasmus MC Department of Viroscience.

Whether you do any or all of the above will tell people something important about the person you are. For now I truly hope you will hang your head in shame. Shame on you, Marion. Shame on you.